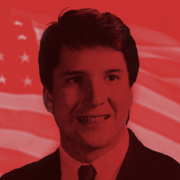 The Education of Brett Kavanaugh

Go To Past Event
from The Education of Brett Kavanaugh held on September 24, 2019

Last year’s Senate confirmation hearings for Supreme Court Justice Brett Kavanaugh were dominated by allegations of sexual misconduct during Kavanaugh’s past, including during his prep school and college years.

While Kavanaugh was ultimately sworn in for a lifetime position on the Supreme Court, many questions about his past remained unanswered. In the new book, The Education of Brett Kavanaugh, New York Times reporters Robin Pogrebin and Kate Kelly—two journalists who broke many critical stories about Kavanaugh during his confirmation hearing—take a deeper look at the formative years of the Supreme Court justice and his confirmation. Their research fills in some of the blanks and explores the essential question: Who is Brett Kavanaugh?

By offering commentary from key players from his confirmation process who haven't yet spoken publicly and pursuing lines of inquiry that were left hanging, the new book will be essential reading for anyone who wants to understand our political system and Kavanaugh's unexpectedly emblematic role in it. The authors are the perfect people to tell this story: Kate Kelly was in the same Washington, D.C. high school circuit as Kavanaugh, while Robin Pogrebin was one of his former classmates at Yale.