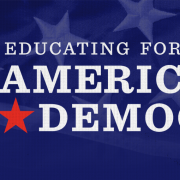 Go To Past Event
from Educating for American Democracy held on March 5, 2021

A healthy constitutional democracy requires a citizenry that has the knowledge, skills and desire to participate in it. The United States is incredibly polarized, and we now have a citizenry and electorate that are poorly trained to meet the modern challenges we are facing. One major reason? The country has disinvested in history and civic education. For example, at the federal level, we spend approximately $50 per student per year on STEM fields and approximately 5 cents per student per year on civics.

A lack of consensus about the substance of history and civics education—what and how to teach—has been a major obstacle to maintaining excellence in history and civics education in recent decades. In response to this critical moment, The Commonwealth Club is pleased to support a new effort, Educating for American Democracy, a significant new initiative to provide tools to make civics and history a priority so we as a country can rebuild our civic strength. This education-based special program will focus on this new effort with three participants who participated in the development of the project.

Educating for American Democracy is an unprecedented, cross-ideological effort to provide guidance for excellence in civic and history education for all K–12 students—and to enhance the way in which the subjects are taught in schools so they generate prepared, informed and engaged citizens. The project was funded by the National Endowment for the Humanities and the U.S. Department of Education through a grant to iCivics, Harvard University, Tufts University and Arizona State University.

A national network of more than 300 scholars, educators and practitioners from ideologically and demographically diverse backgrounds have collaborated to create a roadmap and accompanying documents that provide suggested educational strategies and content for history and civics at every grade level—along with strategies for implementation in schools—so every state and district can fit the needs of their own, different communities. States and local school districts can use the roadmap to transform the way they teach civics and history so it meets the needs of today’s diverse 21st century K–12 student body.

The roadmap is not a national curriculum, nor is it a mandate. It is a series of guidelines that states and districts may opt to use. It is committed to providing instructional strategies and content for all learners to ensure that excellent history and civic learning opportunities are delivered equitably throughout the country.

Last year, at the beginning of the pandemic, The Commonwealth Club launched its own civics education effort, Creating Citizens, with founding support from the Koret Foundation. This program is part of that growing effort.