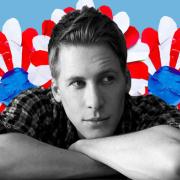 Go To Past Event
from Dustin Lance Black: Coming of Age in Red and Blue America held on May 8, 2019

Join Dustin Lance Black, influential LGBTQ+ activist and the Academy Award-winning screenwriter behind Milk, as he reveals his unexpectedly conservative origins in his new memoir, Mama’s Boy: A Story from Our Americas, providing personal and philosophical insight into the complicated divide between red and blue America.

Black’s memoir chronicles his coming of age in a military, Mormon household in Texas and moving to more liberal California after his mother’s remarriage. Finding himself at odds with the religious and political atmosphere of his family and his community’s condemnation of his sexuality, Black kept his identity a secret. He ultimately found release and professional success in the arts and reveals that throughout his often difficult childhood, he and his mother always managed to share a powerful bond of support. When Black played an instrumental role in the overturning of California’s antigay marriage Proposition 8, she was next to him despite a lifetime of opposition.

Join Dustin Lance Black live at INFORUM as he reflects on his personal journey to self-acceptance and success and shares his unique perspective on bridging the many divides in our country today.