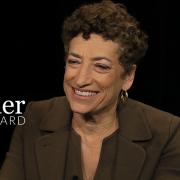 Climate One presents Naomi Oreskes the 6th Annual Stephen Schneider Award for Outstanding Climate Science Communication. According to Schneider Award juror Ben Santer, “Her 2004 Science paper helped to quantify, for the first time, the broad scientific consensus on climate change. Her recent research unmasked the forces behind denial of human effects on climate and improved our chances of having a responsible, science-based discussion of climate change solutions.”

Dr. Oreskes’ work first became well known when her paper “The Scientific Consensus on Climate Change” was featured in Al Gore’s seminal documentary An Inconvenient Truth. Later, she co-authored the influential book Merchants of Doubt, which explores the public-relations tactics used by the tobacco industry to obfuscate the health risks of smoking, and draws a parallel to the similar tactics used by the oil industry to forestall government action on climate change. This widely read book inspired a successful documentary of the same name.

The award was established in honor of Stephen Henry Schneider, one of the founding fathers of climatology, who died suddenly in 2010. Internationally recognized for research, policy analysis and outreach in climate change, Dr. Schneider focused on climate change science, integrated assessment of ecological and economic impacts of human-induced climate change, and identifying viable climate policies and technological solutions. He also consulted with federal agencies and/or White House staff in the Nixon, Carter, Reagan, George H.W. Bush, Clinton and George W. Bush administrations. His work is chronicled at climatechange.net.

Naomi Oreskes, Ph.D.
Professor of the History of Science and Affiliated Professor of Earth and Planetary Sciences, Harvard University