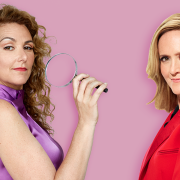 Go To Past Event
from Dr. Jen Gunter with Samantha Bee: The Menopause Manifesto held on June 2, 2021

Dr. Jen Gunter, the outspoken and digitally savvy Bay Area doctor who has been called "the world's most famous gynecologist" returns to The Commonwealth Club for what should be a fun discussion on her new book, The Menopause Manifesto, with television comedian Samantha Bee.

Dr. Gunter, who has made waves with her fierce advocacy of women's health, saw great success with her previous book, The Vagina Bible. The Menopause Manifesto takes on stubborn myths and misunderstandings about menopause in Dr. Gunter's traditional fashion: hard facts, real science, fascinating historical perspective, expert advice, and strong doses of humor. As the book notes, the only thing predictable about menopause is its unpredictability. Factor in widespread misinformation, misogyny, a lack of research, and the culture of shame around women's bodies, and it's no wonder women are unsure what to expect during the menopause transition and beyond. Dr. Gunter believes women (and men) should be educated on what's to come with menopause years in advance of it happening rather than the current practice of leaving people on their own with bothersome symptoms and too much conflicting information.

Join us for what is sure to be a frank, funny, and unique discussion!

Dr. Jen Gunter is an internationally bestselling author, obstetrician, and gynecologist with more than three decades of experience as a vulvar and vaginal diseases expert. Her New York Times and USA Today bestselling book, The Vagina Bible, has been translated into 19 languages, and The Guardian calls her "the world's most famous—and outspoken—gynecologist." The recipient of the 2020 NAMS Media Award from The North American Menopause Society, she is a columnist for The New York Times and the star of "Jensplaining," a CBC video series that highlights the impact of medical misinformation on women.

Samantha Bee is the host of the Emmy Award-winning "Full Frontal with Samantha Bee," the first late-night satire show hosted by a woman. Previously, she was the longest-serving correspondent on "The Daily Show," and she served as co-creator and executive producer of "The Detour." She is the author of the essay collection I Know I Am, But What Are You? and has been featured in Time 100: The Most Influential People. Recently, Bee and "Full Frontal" launched the successful #MailedIt campaign to help save the United States Postal Service and also launched a podcast titled "Full Release."

In association with INFORUM and Marin Conversations.

This program is part of our Marin Conversations series, spotlighting the thought-leadership of the North Bay, and is presented with support from Relevant Wealth Advisors.