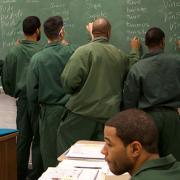 Go To Past Event
from Documentary Filmmakers Lynn Novick and Sarah Botstein: College Behind Bars held on September 19, 2019

For 30 years, Lynn Novick has been directing and producing landmark documentary films about American culture, history, politics, sports, art and music. With co-director Ken Burns, she has created more than 80 hours of acclaimed programming for PBS, including The Vietnam War, Baseball, Jazz, Frank Lloyd Wright, The War and Prohibition. This duPont–Columbia and Peabody-Award winning filmmaker’s new documentary series, College Behind Bars, reveals the transformative power of higher education through the experiences of men and women trying to earn college degrees while incarcerated. Executive produced by Ken Burns and produced by Sarah Botstein, College Behind Bars is Novick’s solo directorial debut and will air November 25 and 26 on PBS stations.

The four-hour series, distilled from nearly 400 hours of cinéma vérité footage, explores the lives of a dozen incarcerated men and women as they struggle to earn degrees in the Bard Prison Initiative (BPI), one of the most rigorous and effective prison education programs in the country. In this era of mass incarceration, America is the world’s largest jailer, with more than 2 million men and women behind bars; 630,000 are released annually, and nearly 50 percent end up back in prison within five years, trapped in a cycle of imprisonment, release and reincarceration. Once commonplace in American prisons, higher education declined precipitously after 1994, when Congress ended federal Pell Grants for inmates as part of the Clinton crime bill. In the nearly 20 years since BPI began, more than 500 alumni have been released, and fewer than four percent have gone back. The program currently enrolls 300 men and women in six prisons and costs $6,000 per student per year, most of it privately funded.

Here’s a chance to get a preview of the series and hear a discussion with the filmmakers and formerly incarcerated BPI students featured in the film about the power of education to transform lives and benefit society at large.

In association with KQED

For a sneak peak of the series, go to: https://www.youtube.com/watch?v=K8ec3QpnaiU

Sarah Botstein
Senior Producer, College Behind Bars; Producer with Ken Burns on The Vietnam War, Prohibition and The War