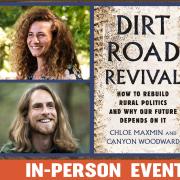 Democrats and Rural Voters: How to Rebuild Trust

Go To Past Event
from Democrats and Rural Voters: How to Rebuild Trust held on May 18, 2022

For the past several years,  the voting behaviors, interests, cultures and beliefs of those who live far outside cities have been an obsession for many in the media as well as politicians and political strategists in both parties. Rural voters clearly played a role in the election of former President Trump in 2016, and they are expected to play an outsized role in the 2022 and 2024 elections as American continues to divide into "red" and "blue" areas.  The general belief is that Democrats have lost rural voters to Republicans for the foreseeable future. For Maine State Senator Chloe Maxmin, a progressive politician, nothing could be farther from the truth.

As the youngest person ever elected to the Maine senate, Maxmin won successful elections in rural red districts that few thought could be won by a Democrat. She and her campaign manager, Canyon Woodward, saw how, in their view, the Democratic Party has focused for too long on the interests of elite leaders and big donors, forcing the party to abandon the concerns of rural America—jeopardizing, they say, progress on climate justice, racial equity, economic justice and more.  In their new book, Dirt Road Revival, Maxmin and Woodward look at how rural American has been left behind and lay out a long-term vision for Democrats to rebuild trust and win campaigns in rural America. Their book shows how progressive values can be translated into a rural context, moving beyond the failed strategies of establishment consultants and utilizing grassroots-movement organizing strategies to effectively engage rural voters.

The program will begin with a film about Maxmin's winning campaigns, and then Maxmin and Woodward will discuss how they believe Democrats can change their current course and win in districts in every area of the country. Please join us for this unique conversation.

Maine State Senator (District 13); Co-Author, Dirt Road Revival: How to Rebuild Rural Politics and Why Our Future Depends On It

Political Strategist; Co-Author, Dirt Road Revival: How to Rebuild Rural Politics and Why Our Future Depends On It