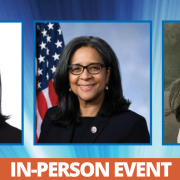 From D.C. to Silicon Valley to Hollywood: Leadership Lessons We Learned Along the Way

Go To Past Event
from From D.C. to Silicon Valley to Hollywood: Leadership Lessons We Learned Along the Way held on May 13, 2022

In celebration of APA Heritage Month, join us for this special roundtable gathering, in which former Facebook vice president and Ancestry CEO Deb Liu, U.S. Representative Marilyn Strickland, and New York Times best-selling author and filmmaker Abigail Hing Wen will share their remarkable journeys to the top of their respective fields in Silicon Valley, Washington, D.C., and Hollywood. Learn what the journeys of these three Asian American women to leadership roles in business, politics and pop culture can teach us about diversity and leadership in today’s America.

Drawing on their diverse experiences, the trio will explore what it means to be leading change from the inside during this critical time in our nation’s history. Hear their stories of perseverance and of how these powerful women now view their roles and responsibilities as leaders for the next generation.

Deb Liu is the author of Take Back Your Power: Ten New Rules for Women at Work (forthcoming, August 2022) and the president and CEO of Ancestry. With more than 19 years in the tech industry, she has been named one of Business Insider’s most powerful female engineers and one of PaymentsSource’s most influential women in payments. She was previously a senior executive at Facebook, where she created and led Facebook Marketplace, a platform for millions of people to buy from and sell to one another. She also led the development of Facebook’s first mobile ad product for apps and its mobile ad network, in addition to building the company’s games business and payments platform. Prior to Facebook, she spent several years in product roles at PayPal and eBay. She serves on the board of Intuit and Ancestry and is a seed investor and advisor to several startups. She also holds several payments- and commerce-related patents.

Actively involved in promoting diversity in tech, Liu founded Women In Product, a nonprofit with the goal of connecting and supporting women in the product management field. She is a member of the Committee of 100 and was named an A100 by Gold House.  Liu received a BS in civil engineering from Duke University and an MBA from Stanford’s Graduate School of Business. She lives in California with her husband and three children.

Congresswoman Marilyn Strickland represents Washington’s 10th Congressional District. Born in Seoul, South Korea, Strickland is the first African-American to represent Washington State at the federal level, and one of the first Korean-American women elected to Congress in its 230-year history. Raised in the South Sound, Strickland earned her B.A. in sociology from the University of Washington and an MBA from Clark-Atlanta University, a Historically Black College and University.

Abigail Hing Wen is a New York Times best selling author, tech exec specializing in artificial intelligence, and filmmaker, as well as a wife and mother of two. She writes and speaks about tech, AI ethics, women's leadership, implicit bias, equity, and transforming culture. Abigail penned the New York Times best selling novel Loveboat, Taipei and its sequel, Loveboat Reunion. She is executive producing the book-to-film adaptation starring Ross Butler and Ashley Liao, with Lionsgate as global distributor as well as the producers of the Netflix franchise To All the Boys I’ve Loved Before.

She holds a BA from Harvard, JD from Columbia and MFA in writing from Vermont College of Fine Arts. In her career in tech, she has negotiated multi-billion dollar deals on Wall Street and in Silicon Valley, worked in venture capital and hosted Intel’s "Artificial Intelligence."

This program is generously supported by Ancestry.