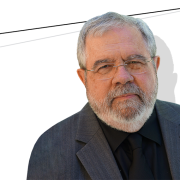 Go To Past Event
from David Cay Johnston: The Big Cheat held on December 9, 2021

The Trump family is one of the most talked about families in the United States. Donald Trump's presidency elevated that and helped put them on an international stage that brought the family to the forefront of the world. Over the last half decade, journalist and Pulitzer Prize winner David Cay Johnston has provided the American people with fascinating insight into the financial world of one of America's most influential families.

Johnston talks about the financial life of the Trump Family in his new piece of work, The Big Cheat: How Donald Trump Fleeced America and Enriched Himself and His Family. This new book details the aspects of the Trump family's finances during the four years Donald Trump spent in office, leaving no details out, to give you the complete picture.

Join us as David Cay Johnston offers an inside look into the financial world of the Trump family.

Co-Founder, DCReport.org; Author, The Big Cheat: How Donald Trump Fleeced America and Enriched Himself and His Family; Twitter @DavidCayJ