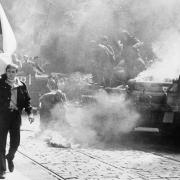 Daughter of the Cold War

Grace Kennan Warnecke has lived a life on the edge of history: In addition to her own multi-faceted career as a professional photographer, television producer, and book editor and critic, and her deep involvement in U.S.-Russia relations, she is the daughter of one of the most influential diplomats of the 20th century, the wife of the scion of a newspaper dynasty and the mother of the youngest owner of a major league baseball team. Born in Latvia, Warnecke lived in seven countries and spoke five languages before she was eleven. As a child, she witnessed Hitler’s march into Prague, attended a Soviet school during World War II and sailed the seas with her father. Later she accompanied Ted Kennedy and his family to Russia, escorted Joan Baez to Moscow to meet with dissident Andrei Sakharov, hosted Josef Stalin’s daughter Svetlana on the Kennan family farm after Svetlana defected, and witnessed the breakup of the Soviet Union. Come hear from this remarkable woman who has a front-row seat to history.