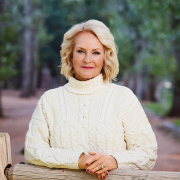 A Conversation with Cindy McCain

Go To Past Event
from A Conversation with Cindy McCain held on May 5, 2021

"My husband, John McCain, never viewed himself as larger than life—but he was. He had more tenacity and resolve than anybody I ever met. Being with him didn’t hold me back—it gave me flight, a courage I never would have felt on my own." —Cindy McCain

John McCain was a respected six-term senator from Arizona, Navy hero, and dedicated family man. No one knew him better than his wife of 38 years, Cindy McCain.

She said, “My husband John lived by a code: country first. We are Republicans, yes, but Americans foremost. . . ." Last year she made the bold decision to cross party lines and endorse Joe Biden for president.

In her new book Stronger, she reveals her own successes and challenges and how Sen. McCain inspired her to fight for family, honor and country.

Join an inspirational conversation with Cindy McCain about her life and her husband's lasting legacy.