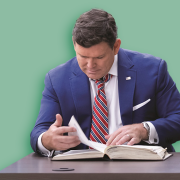 A Conversation with Bret Baier

Go To Past Event
from A Conversation with Bret Baier held on October 20, 2021

Brought to us by Fox News Chief Political Anchor Bret Baier, To Rescue the Republic is an epic history of Ulysses S. Grant—spanning from the battlefields of the Civil War to the violent turmoil of Reconstruction to the forgotten electoral crisis that nearly fractured a reunited nation.

Desperate for bold leadership in the midst of the Civil War, President Abraham Lincoln turned to Ulysses S. Grant, appointing him lieutenant general of the Union Army, precipitating their victory within a year. Four years later, as president of the United States, Grant rose to the challenge of Reconstruction by advancing its agenda and aggressively countering the Klu Klux Klan.

When the contested presidential election of 1876 produced no clear victory, it was Grant who forged the painful compromise that saved the fragile nation, but tragically pushed the Civil Rights movement even further down the road. In this book, Baier dramatically reveals Grant’s palpable and essential influence on the United States as it suffered through a severe period of internal division.

Join us as Bret Baier brings contemporary resonance and fresh detail to the life of one of America’s most legendary leaders.