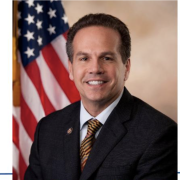 Go To Past Event
from Congressman David Cicilline: Fighting for Democracy Matters held on September 7, 2022

Over the past two years, Rhode Island congressman David N. Cicilline has become an outspoken voice on some of the most critical issues facing the country and the Bay Area, including regulating and reining in big social media companies, reducing gun violence, and promoting economic development. As chair of the Congressional LGBTQ+ Equality Caucus, Rep. Cicilline is leading efforts to promote equality for all, regardless of sexual orientation or gender identity.

Thrust into the national spotlight during the second impeachment of President Trump, Cicilline is increasingly concerned about America's democracy and the threats to it from within the country and on Capitol Hill itself. He believes in an extensive response that spans both citizen opposition and potent political reforms, including an end to the Senate filibuster, discarding the Electoral College, expanding the Supreme Court, and requiring that justices adhere to a code of ethics. He outlines some of these thoughts in his new book, House on Fire: Fighting for Democracy in the Age of Political Arson. In it, Cicilline spares no one from criticism as he argues for a politics that produces results and warns that without it, America could slip into being a country we no longer recognize.

Please join us to hear a rising force in Democratic politics on fighting for what matters.

In Conversation with Mark Follman