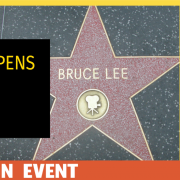 The Chinese Historical Society of America collects, preserves and illuminates the history of Chinese in America by serving as a center for research, scholarship and learning to inspire a greater appreciation for, and knowledge of, their collective experience through exhibitions, public programs and any other means for reaching the widest audience.

CHSA promotes the contributions and legacy of the Chinese in America through its exhibitions, publications, and educational and public programs in the museum and learning center. It is housed in the landmark Julia Morgan-designed Chinatown YWCA building at 965 Clay Street in San Francisco.

Since February of last year, CHSA has been led by Justin Charles Hoover, a visionary Chinese American museum professional who is breathing new life into the old museum building—and outside its walls, too.

In this multi-media presentation, Justin Hoover will provide in-person and virtual attendees with a virtual tour of the museum and its traditional exhibits, as well as a virtual tour of its upcoming exhibit, “We Are Bruce Lee,” celebrating the life and many contributions of film legend Bruce Lee. This exciting exhibit will occupy the entire museum space.

Join us and get a taste of what a 21st century museum can look like!

Justin Hoover is the executive director of the Chinese Historical Society of America (CHSA) in San Francisco and is a civic and cultural leader in the Bay Area and beyond. He has deep roots in the Bay Area visual arts and API community. He brings to his position critical experience in museum and cultural center administration as well as international curatorial practice.

Hoover has a 16+ year career in history museums and art and cultural centers. He has been the creative director of Fort Mason Center, curator of ehibitions at the Santa Cruz Museum of Art, and history curator, the gallery director and curator of SOMArts Cultural Center, and more. Hoover holds a Master’s Degree of Public Administration of International Management from the Middlebury Institute of International Studies, and a Master’s Degree in Fine Art from the San Francisco Art Institute.

Moderator Betty Yu joined KPIX 5 in November 2013 as a general assignment reporter. She spent two years at WTVJ, the NBC-owned station in Miami, as a reporter before moving to San Francisco. Prior to that, she was an anchor and reporter for News 12 The Bronx and Brooklyn, a 24-hour cable news station. In 2012, Betty was honored as anchor on the “Best Single Newscast” from the New York Press Club. Exactly one year ago, on March 17, 2021, Betty moderated a large Commonwealth Club program called “Help from Abroad: China-based Donors and International Partners Help US Hospitals Fight COVID-19.” Among her other community service activities, Betty is helping organize and emcee Chinese Hospital’s 123rd Anniversary Celebration on June 2. A Bay Area native, Betty graduated from the University of California, Berkeley with degrees in political science and rhetoric. She also has a Master of Science degree in journalism from Columbia University.