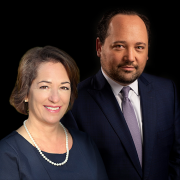 Go To Past Event
from Carol Leonnig and Philip Rucker: Inside Donald J. Trump's Catastrophic Final Year held on July 26, 2021

The year 2020 brought with it a nation riddled with grief as the United States descended into a raging pandemic, steep economic downfall, and unsettling political instability. As half a million perished and millions were left jobless from coronavirus, what was really going on inside the White House? And who was influencing Donald Trump as he refused to concede power after an election he had clearly lost?

Washington Post reporters Carol Leonnig and Philip Rucker answer these questions for the American people in I Alone Can Fix It, a gripping exposé of an administration sabotaging its own country. Their sources were in the room as Trump and the key players around him—doctors, generals, senior advisors and family members—continued to prioritize the interests of the president over that of the country. These witnesses saw firsthand Trump’s desire to deploy military force against protests in the wake of George Floyd’s death. They saw his refusal to take coronavirus seriously, even to the point of allowing himself and those around him to be infected. They, along with the rest of the world, saw him spur on what would become the January 6 storming of the U.S. Capitol building.

With unparalleled access, Rucker and Leonnig delve into exactly who they say enabled—and who foiled—the president as he desperately held onto his fleeting presidency in his final year in office. Join us as Leonnig and Rucker reveal the inner workings of the 2020 Trump White House.

In Conversation with Yamiche Alcindor