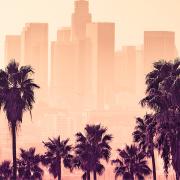 Is California’s Climate Progress Going Up in Smoke?

Go To Past Event
from Is California’s Climate Progress Going Up in Smoke? held on January 23, 2020

California has been at the forefront of America’s climate fight since Governor Arnold Schwarzenegger signed the country’s first major climate law in 2006. The state’s suite of policies for decarbonizing the economy survived industry-funded attacks in court and at the ballot box, and remained largely consistent under Democratic and Republican governors.

But the state may not really be the climate leader it is perceived to be. Savage wildfires are releasing massive amounts of carbon stored in forests and erasing much of the state’s gains. A recent report by Next 10, an independent think tank, indicates the state will meet its 2030 goals 30 years late. That dents one of the country’s most positive and enduring carbon narratives.

Is California really the climate leader it’s purported to be? Join us for a conversation with Rachel Becker, environmental reporter with CalMatters, Kate Gordon, climate adviser to Governor Newsom, and Noel Perry, founder of Next 10, on how California can reach its carbon goals as the federal government doubles down on fossil fuels.