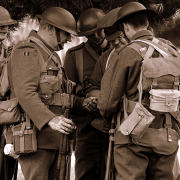 Go To Past Event
from California at War held on October 4, 2018

World War I propelled the United States into the 20th century and served as a powerful catalyst for the making of modern California, expanding the role of the government and enlarging private citizens’ associations. Never before had so many Californians taken such a dynamic part in community, state, national and international affairs. Diane North not only writes about transformative battlefield experiences, but she also documents how daily life has changed for everyone on the home front—factory and farm workers, housewives and children, pacifists and politicians.

Even before the United States entered the war, California’s economy flourished because its industrialized agriculture helped feed British troops. The war also provided a boost to the faltering Hollywood film industry and increased the military’s presence through the addition of Army and Navy training camps and construction and research contracts. Most citizens embraced wartime restrictions with patriotic zeal without foreseeing the retreat into suspicion, loyalty oaths and unwarranted surveillance, all of which set the stage for the beginnings of our modern security state.

Diane North
Adjunct Professor of History, University of Maryland University College, Author, California at War: The State and the People during World War I