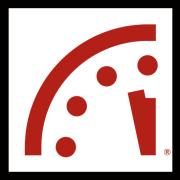 Bulletin of the Atomic Scientists’ CEO Rachel Bronson: Can We Turn Back the Hands of the Doomsday Clock?

Go To Past Event
from Bulletin of the Atomic Scientists’ CEO Rachel Bronson: Can We Turn Back the Hands of the Doomsday Clock? held on June 13, 2018

The Doomsday Clock debuted in 1947 on the cover of the Bulletin of the Atomic Scientists’ very first magazine to convey the urgent need to avoid nuclear war. Today, more than 70 years later, the iconic clock is globally recognized and has been called “the most powerful piece of information design in the 20th century.” The clock is currently set at 2 minutes to midnight, the closest it has been to midnight since 1953.

Rachel Bronson is the president and CEO of the Bulletin of the Atomic Scientists, where she oversees the publishing programs, the management of the Doomsday Clock, and a growing set of activities around nuclear weapons, nuclear energy, climate change and emerging technologies. Before joining the Bulletin, she served at the Chicago Council on Global Affairs and as senior fellow and director of Middle East studies at the Council on Foreign Relations.

Come for an enlightening discussion on how what we can all do to prevent the Doomsday Clock from ticking forward.