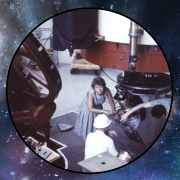 Bright Galaxies, Dark Matter, and Beyond

Go To Past Event
from Bright Galaxies, Dark Matter, and Beyond held on August 26, 2021

This radio program from The Commonwealth Club draws on two separate events: "Fear of a Black Universe" and "Bright Galaxies, Dark Matter and Beyond."

Cosmologist Stephon Alexander argues that great physics requires one to think outside the mainstream—to improvise and to rely on intuition. His approach has led him to three principles that shape all theories of the universe: the principle of invariance, the quantum principle, and the principle of emergence.

And science journalist Ashley Jean Yeager describes how astronomer Vera Rubin's persistence, after her work was initially dismissed, finally convinced the scientific community that dark matter might exist. It is now taken for granted that the universe is mostly dark, made up of particles that are undetectable even by our most powerful telescopes. This discovery of the possible existence of dark matter signaled a Copernican-like revolution in astronomy: not only are we no longer the center of the universe, but even the stuff we’re made of appears to be insignificant. By showing that some astronomical objects seem to exaggerate gravity’s grip, Rubin played a pivotal role in this discovery.