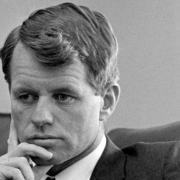 Bobby Kennedy: The Making of a Liberal Icon

Go To Past Event
from Bobby Kennedy: The Making of a Liberal Icon held on August 15, 2016

Nobody was better, half a century ago, at thinking about the biggest solutions for the problems of his age than Bobby, whether that be race riots roiling in cities across America, and especially in California; the war raging in Vietnam; or the general issue of inequality that was dividing people along lines of class, race, gender and generation. Those issues, of course, are a mirror of those facing the country today, when RFK's message is more resonant than ever. He predicted we'd have a black president almost to the day, when no white politician dreamed of it. He talked about how our problems made us ripe for demagogues, though he'd never met Donald P. Trump but did know George Wallace better than anyone. And he offered ways out of all of that, in compelling enough terms to win the California primary and seem poised for the presidency.