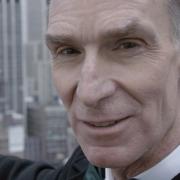 Go To Past Event
from Bill Nye: The Science Guy held on November 6, 2017

Sifting through the Trump administration’s misleading statements on climate change can be a daunting task. That’s where scientist Bill Nye comes in. The Science Guy is on a quest to set the record straight when it comes to anti-scientific thinking and climate denial.

A new documentary, Bill Nye: Science Guy, chronicles the beloved children’s show host as he pivots into the role of one of the country’s leading scientific voices. The film is directed by Jason Sussberg, who takes viewers on an intimate, behind-the-scenes journey as Nye confronts climate change deniers and those who don't believe in science-based facts.

Join us for a conversation about Nye's new documentary, climate science and planet Earth.