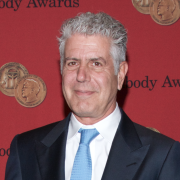 Go To Past Event
from No Reservations: An Evening With Anthony Bourdain held on December 11, 2007
Duration
1:05:44

Culinary "bad boy" and celebrated TV host Anthony Bourdain will describe his travels and share memorable culinary adventures. From Brazil, to China, to Las Vegas, Bourdain has sat down to eat at some of the world’s most famous and infamous tables. "Any schmo can grill a fancy steak," he says, but "it takes a cook to transform a humble pig's foot into something people clamor for.” From scrounging for eel in the backstreets of Hanoi, to chowing down on grilled piranha in Bahia, Bourdain will undoubtedly recall his more outrageous gastronomic forays, sharing his penchant and passion for edible oddities. On his current hit Travel Channel TV show “No Reservations,” the irreverent and always opinionated Bourdain visits exotic countries, cities worldwide, and even locales within the U.S., where hosts treat him to local foods and traditions that season the world’s cultures.

Bourdain is the author of nine fiction and non-fiction books, including his newest, No Reservations: Around the World on an Empty Stomach, a collection of pictures and stories from his three years on the road searching for the perfect meal. Bourdain’s best-selling Kitchen Confidential: Adventures in the Culinary Underbelly (2000), spent 14 weeks on the New York Times bestseller list. He has written articles for The New York Times, The Times (UK), the Observer, Scotland on Sunday, the Face, Limb by Limb, Black Book and The Independent, and is a contributing authority for Food Arts magazine. His mystery novels include Bone in the Throat and Gone Bamboo.

The 30-year veteran of professional kitchens is also the executive chef at Les Halles in Manhattan. Born in New York, Bourdain studied at Vassar College and graduated from the Culinary Institute of America before running kitchens at New York City's Supper Club, One Fifth Avenue and Sullivan’s.

This program was recorded live on November 19, 2007