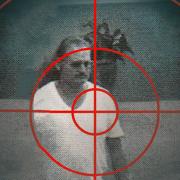 Go To Past Event
from Annie Jacobsen: Inside the CIA's Secret History held on May 15, 2019

Annie Jacobsen is a Pulitzer Prize finalist and investigative journalist whose work revolves around government secrets. She has published books on a range of topics, including what really goes on inside Area 51; Operation Paperclip, which brought Nazi scientists to America; and government-funded research projects on extrasensory perception (ESP) and psychokinesis.

Her latest book delves into one of the most infamously covert agencies in the country: the Central Intelligence Agency (CIA). Surprise, Kill, Vanish: The Secret History of CIA Paramilitary Armies, Operators, and Assassins is an unprecedented look inside the Special Activities Division of the CIA, one of the most effective black operations in the world. Through interviews with 42 men and women who served in covert CIA operations, she delivers a shocking exposé of U.S. covert operations with the pace and novelistic skill of a thriller.

Join us for an insider’s view on this controversial and understandably obscure component of American foreign policy and the political, ethical and legal quandaries that have come with it.