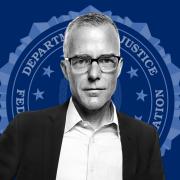 Go To Past Event
from Andrew McCabe, Former Deputy Director of the FBI held on March 13, 2019

On March 16, 2018, just 26 hours before his scheduled retirement, FBI Deputy Director Andrew McCabe was fired by then Attorney General Jeff Sessions. President Donald Trump celebrated on Twitter, saying: "Andrew McCabe FIRED, a great day for the hard working men and women of the FBI - A great day for Democracy." Now McCabe is telling his side of one of the most intriguing political episodes of 2018.

In The Threat: How the FBI Protects America in the Age of Terror and Trump, Andrew G. McCabe offers a dramatic and candid account of his career and an impassioned defense of the FBI's agents and of the institution's integrity and independence in protecting America and upholding our Constitution. Under FBI Directors Robert Mueller and James Comey, McCabe led the investigations of major attacks such as the Boston Marathon bombing, a plot to bomb the New York subways, the Benghazi attack and Hillary Clinton's use of a private email server when she was secretary of state.

According to McCabe, the greatest threat to the United States right now comes from within, as he claims that President Trump and his administration ignore the law, attack democratic institutions, degrade human rights and undermine the U.S. Constitution that protects every citizen. Join us for an important and compelling conversation.

Andrew McCabe
Former Deputy Director, FBI; Author, The Threat: How the FBI Protects America in the Age of Terror and Trump