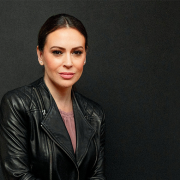 Go To Past Event
from Alyssa Milano: Sorry Not Sorry held on October 28, 2021

Alyssa Milano’s renowned career is characterized by one success after another. If you don’t know her from one of her many TV or movie roles since her debut at age seven, then it's undoubtedly her activism in politics and the #MeToo movement that has put her on the radar. Milano’s life — being raised in the limelight of celebrity and being in the rooms others dream of — has given her unmatched insight into parts unknown. At the same time Milano is a wife, a mother of two (plus many animals), and has strived to maintain a sense of normalcy despite her powerful, star-turned-humanitarian persona. From within this unique well of knowledge comes Milano’s new book Sorry Not Sorry, a series of both unimaginable and wildly relatable tales from a life’s worth of playing many roles, including herself.

At INFORUM, Milano will give an insider peek into the head that wears many hats — sharing relationship advice, tales borne from stardom, and a generous dose of humor. Sincere, striking and welcomingly blunt, Milano’s stories are sure to charm time and time again.