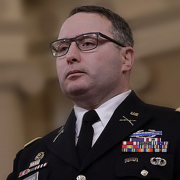 Go To Past Event
from Alexander Vindman: Here, Right Matters held on August 10, 2021

On Thursday morning, July 25, 2019, then-President Donald Trump made a congratulatory phone call to Ukraine’s newly elected President Volodymyr Zelensky. In the months that followed, the true nature of that conversation would be revealed to the American public due to the moral stance of one man: Lieutenant Colonel Alexander Vindman. Faced with a moment of truth for his nation, Vindman felt duty-bound to report it up the chain of command that the president of the United States had extorted a foreign ally to damage a political challenger at home. Now, for the first time, Alexander Vindman is telling his story of how he ended up at the center of a firestorm for his decision to report the infamous phone call that led to the presidential impeachment.

As an immigrant raised by a father who fled the Soviet Union in pursuit of a better life for his children, Vindman had to learn how to build a life from scratch and take big risks to achieve important goals. In his new book, Here, Right Matters, he discusses how, in the face of sure-fire career derailment and intense public scrutiny, he put it all on the line to protect American democracy.

Join us for Alexander Vindman’s passionate and candid account of his family, his career and his exposure of what he considered a grave abuse of power.