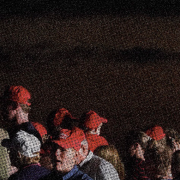 Adam Serwer: The Cruelty Is the Point

Go To Past Event
from Adam Serwer: The Cruelty Is the Point held on July 20, 2021

The Atlantic's Adam Serwer's unique approach to writing—combining political analysis of current events with a strong grasp of the historical antecedents that made those events possible—made him an indispensable writer during the Trump years, particularly for those who disagreed with the politics and approach to governance taken by the 45th president of the United States. Serwer coined the phase "the cruelty is the point" to describe how the Trump administration had made cruelty not merely an unfortunate byproduct of its efforts but the central theme of the MAGA approach toward governance and American civic life.

Serwer's new book—a collection of new and old essays—explores the the Trump presidency, the volatile powers it harnessed, and the continuing impact it has on the country's politics and the Republican Party. With his unique approach, Serwer chronicles the Trump administration not as an aberration but as an outgrowth of the inequalities the United States was founded on. He charts he ideological and structural currents behind Trump’s rise and why he remains so potent today.

The new essays and previously published works in this book explore white nationalism, myths about migration, the political power of police unions, and the many faces of anti-Semitism. For all the issues he examines, cruelty is the glue, the binding agent of a movement fueled by fear and exclusion. Serwer argues that rather than pretending these four years didn’t happen or dismissing them as a brief moment of madness, we must face what made them possible.

Please join us for an important conversation on the legacy of the Trump administration and why Serwer believes we must continue to understand its role in American political life.

In response to the COVID-19 pandemic, we are currently hosting all of our live programming via YouTube live stream. This program was recorded via video conference on July 20th, 2021 by the Commonwealth Club of California.

Staff Writer, The Atlantic; Author, The Cruelty Is the Point: The Past, Present and Future of Trump's America

In Conversation with Errin Haines