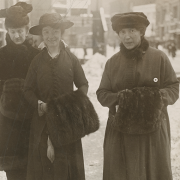 Go To Past Event
from Adam Hochschild: Rebel Cinderella held on September 24, 2020

Stokes played a dramatic role in the struggle for labor equality and women’s rights, but is now forgotten. Rose Pastor arrived in New York City in 1903, a Jewish refugee from Russia who had worked in cigar factories since she was 11. Just two years later she married James Graham Phelps Stokes, scion of a legendary New York high society family. Their union of rich and poor, native-born and immigrant, gentile and Jew, made them America’s most improbable couple, whose Socialist Party friends included Emma Goldman, Eugene V. Debs, John Reed, Margaret Sanger, Jack London, and W.E.B. Du Bois. Stokes became a renowned radical orator, advocating for the rights of labor and in favor of birth control, earning her notoriety as “one of the dangerous influences of the country” from President Woodrow Wilson.

But in a way no one foresaw, her too-short life would end in the same abject poverty with which it began.