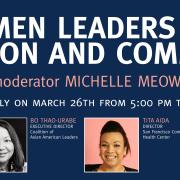 Go To Past Event
from AAPI Women Leaders Building Coalition and Community held on March 26, 2021

Join us for a special Zoom discussion featuring AAPI women leaders exploring the topic of building coalition and community.

Bo Thao-Urabe is a practice-based possibilian who focuses on creating community-centered, asset-based solutions and transforming practices so that there is meaningful change for those most impacted by systemic inequities. Having immigrated to the United States as a refugee child after the Secret War in Laos, Bo’s lived experiences have continuously shaped how she creates to ensure communities can fully participate in, contribute to, and shape our democracy. Her extensive leadership experiences include building and leading local, national, and global efforts.

She is Founder and Executive and Network Director of the Coalition of Asian American Leaders (CAAL). Previously, she served as Senior Director at Asian Americans/Pacific Islanders in Philanthropy (AAPIP), leading their social justice philanthropy work. She served as executive director of several other nonprofits before that. This dynamic change-maker also co-founded the Asian Pacific Institute on Gender-Based Violence, Hmong Women Achieving Together, Sisterhood Laos, RedGreen Rivers, Building Our Future: A Global Campaign, and the Building More Philanthropy with Purpose (BMPP) Giving Circle—also fondly referred to as the “Bad Mo Pho Phamily” among Giving Circle members. Bo’s board service currently includes Propel Nonprofits, Drake Bank and The Minneapolis Foundation.

Leanna Louie is born in Toisan China, in February 1972, Immigrated to SF USA in 1979 with family at age 7. Grew up and educated in SFUSD public schools, Spring Valley ES, Marine MS, Mission HS. Joined the US Army at 18 upon graduation from high school. Served 5 years active duty enlisted, trained in general medical and pharmacology at Fort Sam Houston, Texas. Stationed in Germany 1991-1993 at the 97th General Hospital. Next duty station was Fort Lewis, Washington at the Madigan Army Medical Center Outpatient Pharmacy 1993-1995. Completed an AA in Technology at Pierce College, Washington. Was recommended by Company Commander for Officer School. Attended Pacific Lutheran University, majored in Chinese Studies, minored in History, and trained in ROTC. Upon graduation in 1998, was commissioned 2LT and received further Officer Training at Fort Huachuca, Arizona. Then was stationed at Seoul, Korea 1999-2000. Returned to U.S. and was stationed at Fort Lewis, Washington at the 29th Signal Battalion where I ended my military service in January 2001. Did a short stint at SF City Hall as a Legislative Aide. Then proceeded to work for the City of Sacramento in 2002-2012 in a few different Departments including the Neighborhood Services Department as Resource Coordinator, Solid Waste Department as Administrative Analyst, and Fire Department as Administrative Analyst. Moved to San Francisco and became a business partner at Melody Café Organic Mediterranean Cuisine 2013-2018. Started in Glim Super Alkaline High pH Water Cleaner business in January 2018. Glim is now available in over 25 locations in the greater SF Bay Area, Sacramento, and Los Angeles.

"Why did I get into Glim? I had severe allergies to many things as indicated by both blood tests and allergy prick test. After over 35 years of suffering from allergies, my diet became more and more limited. Finally to a point that I was only eating plain rice and bok choy because everything else I ate seemed to make me break out. I spent lot of time doing research and found that many American grown food caused me to break out due to the massive amount of pesticides and other chemicals used. In addition, all the household cleaners are loaded with toxic chemicals which is the reason why I was getting sick and had terrible allergies. Combine that with air pollution from diesel busses in the 1980s and second hand cigarette smoke, I felt like I would get cancer anytime like the millions of Americans. Glim was introduced to me in January 2018, and after using Glim to clean my restaurant, pots and pan, walls and floors, sinks and toilets, stove and oven, hood and vent, fruits and vegetables, clothes and shoes, face and body...my life has completely changed! I can eat without fear of break outs and breathe without fear of inhaling something toxic. Glim can really change the world. For all the people who have purchased and used GLIM, it changed their lives. There are so many testimonials that I could fill up a wall of names and their testimonies."

Nikki Calma aka Tita Aida, is a familiar name to the Bay Area communities for the past twenty years. She is a tireless and proud transgender community leader in the Asian & Pacific islander LGBTQI community and also in the greater LGBTQI of the Bay Area. Her grassroots activism and community advocacy started in the 90’s.

She spearheaded remarkable initiatives and programs to prevent the spread of HIV/AIDS in the A&PI LGBT community that has changed and improved many lives. Nikki was appointed by then Mayor Gavin Newsom to be the first Transgender member on the Commission on the Status of Women, providing positive visibility and education about the transgender community. Tita Aida also has also used her activism and advocacy by producing various events that mobilizes the Transgender Community of San Francisco and has raised significant support for various organizations including the Transgender Law Center, AIDS Housing Alliance and A&PI Wellness Center to help them sustain and continue their vital programming and services to the LGBTQI community which continued the culmination of her activism and advocacy for the transgender community.

She is currently the Director of Programs and Community Engagement at San Francisco Community Health Center (formerly API Wellness). Under her wing are some of the most important programs that serves marginalized communities in San Francisco. One of them is the Trans Thrive Program, a drop-in center that is dedicated to helping the transgender community succeed in San Francisco. Serving almost over a thousand per year of transgender individuals particularly transgender people of color that are marginalized, homeless and living with HIV from the Bay Area, they provide support to clients, provides them with case management, HIV prevention and education, basic services and support including meals, and provides a safe space for expression and empowerment.

In response to the COVID-19 pandemic, we are currently hosting all of our live programming via YouTube live stream. This program was recorded via video conference on March 26th, 2021 by the Commonwealth Club of California.

Producer and Host, "The Michelle Meow Show" on KBCW/KPIX and Podcast; Member, Commonwealth Club Board of Governors—Moderator