No Straight Lines: How Queer Comics Artists Changed Their World

From Peabody Award-winning filmmaker Vivian Kleiman (Color Adjustment) comes an in-depth look at the evolution of queer comics, starting in the 1970s when LGBTQ+ stories were not a part of the popular culture. Through the careers of five scrappy and pioneering cartoonists who depicted everything from the AIDS crisis to “coming out” to same-sex marriage, Kleiman's new film No Straight Lines captures the beginnings of queer comics, from its origins as an underground art form to its progression into a social movement, culminating with its long-awaited mainstream acceptance into comic books, newspaper strips, and graphic novels.

No Straight Lines premieres on the PBS documentary series "Independent Lens" January 23, 2023, at 10 p.m. EST (check local listings). The film will also be available to stream on the PBS Video app.

Join us for a conversation with filmmaker Vivian Kleiman and cartoonists Jennifer Camper and Justin Hall.

Note: This is a discussion of the film; it is not a screening.

Director and Producer, No Straight Lines

Online:
Free for members and nonmembers 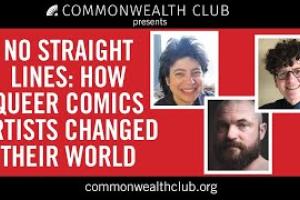 No Straight Lines: How Queer Comics Artists Changed Their World