At a time of deep racial divisions in America, one of the country's most prominent civil rights leaders, Ben Jealous, has come up with a unique and inspiring way for each of us to reconcile, heal and work to unite the country, which he shares in a new book comprised of gripping and lively parables.

In his new book, Never Forget Our People Were Always Free, Jealous illuminates a new path to healing America’s racial divisions. In offering new glimpses of political and faith leaders as different as Jack Kemp, Stacey Abrams, and the late Archbishop Desmond Tutu and heroes as unlikely as a retired constable, a female pirate from Madagascar, a long lost Irishman, a death row inmate, and a man with a confederate flag over his heart, Jealous takes on the country's racial divisions in a fascinating new way. He touches on a range of topics, including high suicide rates among white men, the importance of the civil rights movement keeping its doors open to all, and even KKK members grappling with the actual words of Jesus.

Please join us for a unique program with a well-known storyteller who calls on every American to look past deeply cut divisions and recognize we are all in the same boat now.

In Conversation with Robert McDonnell 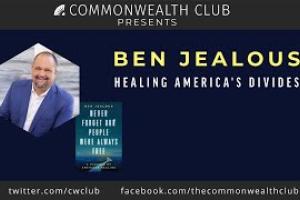