"Stranger at the Gate" Film Screening and Discussion

After 25 years of service, U.S. Marine Mac McKinney returned home to Indiana filled with an all-consuming rage and hatred toward the people he had been fighting against overseas.

Still fueled by his desire to fight for his country, McKinney makes a violent plan to bomb the local mosque. But when he comes face to face with the community of Afghan refugees and others of Muslim faith, his plan and life take an unexpected turn.

This documentary film explores the dynamics of patriotism, humanity and redemption. Following the film screening will be a panel discussion with Director Joshua Seftel, Bibi Bahrami and Mac McKinney.

Welcome and Introduction by Carrie Lozano

Director and Producer, Stranger at the Gate 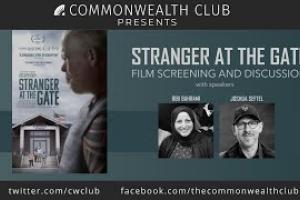 "Stranger at the Gate" Film Screening and Discussion