David Rothkopf: The Untold Story of the American Resistance to Save Our Country

When federal employees start working for the U.S. Government, each person takes an oath to “support and defend the Constitution of the United States against all enemies foreign and domestic.” During the Trump administration, some employees surprisingly found themselves fighting their own commander-in-chief, creating a resistance movement within the government that created tensions throughout the executive branch and various federal agencies.

Political affairs analyst David Rothkopf chronicles the unprecedented role many in the government felt they were forced to play during this tumultuous time and the consequences they faced for their actions.

Rothkopf focuses on the experiences of Lt. Col. Alexander Vindman and his brother Yevgeny, Ambassador Marie Yovanovitch, Fiona Hill, and others who felt they needed to speak out publicly to protect our country. These once-obscure federal bureaucrats rose to national prominence by choosing to fight for what they believed, and Rothkopf believes their stories of resistance need to be told to truly understand what was really at stake for our country. 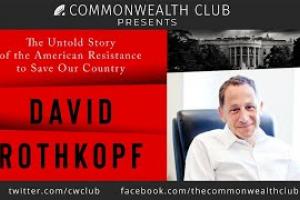 David Rothkopf: The Untold Story of the American Resistance to Save Our Country