As America faces another election as a deeply divided country, Steve Phillips has strong views on what the United States needs to do to strengthen its multiracial democracy. For Phillips, understanding why the country is so divided requires recognizing that many of our divisions are historic in nature, resulting in a contest between democracy and white supremacy that is still left unresolved after the Civil War.

In his new book, How We Win the Civil War, Phillips pulls no punches on what he thinks the country must do to bridge its divides, particularly around issues related to race. Phillips advocates for increasing voter participation, ending what he says are racist immigration policies, and reviving the Great Society programs of the 1960s—all of them geared toward strengthening a new multiracial democracy and ridding our politics of white supremacy.

Join us for a powerful conversation on race, history, politics and finally overcoming our divisions.

In Conversation with Angela Glover Blackwell 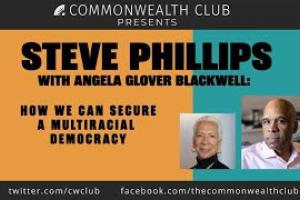