Reza Aslan is a leading expert in world religions and his bestselling books have touched on a range of issues related to history, extremism and spirituality. His latest work, An American Martyr in Persia, challenges us to look at how seriously we take our ideals of constitutional democracy and whose freedom do we support.

Aslan illuminates these issues by exploring the real-story of Howard Baskerville, a 22-year-old Christian missionary from South Dakota who traveled to Persia (modern-day Iran) in 1907 for a two-year stint teaching English and preaching the gospel. Baskerville arrived in the midst of a democratic revolution led by a group of brilliant young firebrands committed to transforming their country into a fully self-determining, constitutional monarchy, one with free elections and an independent parliament. In death, Baskerville became a martyr who spurred the revolutionaries to remove the shah from power, signing a new constitution and rebuilding parliament in Tehran.

At this critical time when many people are questioning it, Aslan's new work offers a powerful parable about the universal ideals of democracy―and to what degree Americans are willing to support those ideals in a foreign land, Iran, a country frequently demonized and misunderstood in the West.

Aslan along with Ray Suarez will explore how one person can still make a difference when freedom is at stake.

In Conversation with Ray Suarez 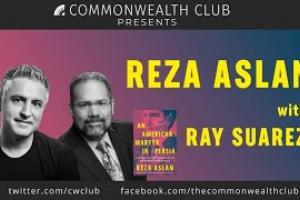