Poland is rapidly becoming the linchpin of the Western effort to defend Ukraine and deter Russia. The Polish-Ukrainian border, since the Russian invasion of Ukraine began in February, is a hub of activity. With refugees from Ukraine flowing back and forth and military equipment being transferred in to help the Ukrainian war effort along with aid for Ukraine's people, Poland has taken a leadership role in Europe and the West, stepping up to both welcome its neighbors and help defend them against Russia's aggression.

As the war drags on into fall, The Commonwealth Club of California is honored to welcome His Excellency Marek Magierowski, ambassador extraordinary and plenipotentiary of the Republic of Poland to the United States, to discuss the current situation on Poland's border with Ukraine and the strategic considerations for Poland, the EU, and the NATO alliance. Ambassador Magierowski was appointed to  Washington, D.C., in November 2021 after previously serving as Poland's ambassador to Israel and in the Ministry of Foreign Affairs as undersecretary of state for economic cooperation with the Americas and Asia.

Ambassador of Poland to the United States 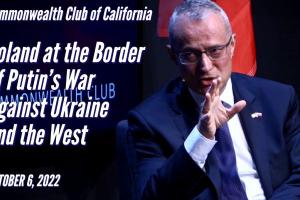