California State Senator Brian Dahle is the Republican candidate for governor. He is making his first visit to The Commonwealth Club to discuss his proposals and plans for leading the largest state in the country.

A longtime advocate of building a better business climate in California, Brian Dahle was the California Chamber of Commerce’s top-rated senator for pro-business votes in 2021 and has a 100 percent rating from the National Federation of Independent Business. He was chosen by his peers in 2017 to be the Assembly Republican leader, leading the caucus until after the 2018 elections, when he stepped down as leader to run in a special election to fill a vacant seat in the 1st Senate District. Before joining the legislature, Dahle served on the Lassen County Board of Supervisors for 16 years.

Please join us as Senator Dahle explains his commitment to California and his plans to address a range of key state issues, including cost of living, crime, homelessness, water, education, energy independence, wildfires, housing, drugs and more. 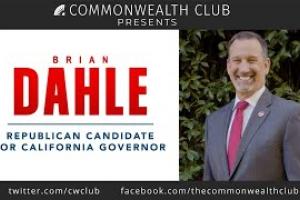