Monkeypox: The Response and What's Next

In May 2022, an outbreak of monkeypox, a viral disease, was confirmed. It quickly spread from the United Kingdom to many countries around the world. Everyone is able to contract monkeypox, but its most rapid spread so far has been through men who have sex with men with new or multiple partners.

How has the LGBTQ community responded? What is the current state of the disease's spread? What treatments are available? What medical or behavioral measures can be taken for prevention of infection? What might happen next—and what's being done to prepare for it?

Join us for an important discussion with experts to break down the truth about the community response to monkeypox, as well as preparation for the future.

Erica Pan, MD, MPH, FAAP is the deputy director of the Center for Infectious Diseases and is the California state epidemiologist, sworn in July 13, 2020. She also served as the acting state public health officer from August 10, 2020 through January 3, 2021. Prior to joining CDPH, Pan served as the health officer since July 2018, and the director of the Division of Communicable Disease Control and Prevention, and deputy health officer at the Alameda County Public Health Department since 2011. Pan served in several positions at the San Francisco Department of Public Health from 2004–2011, including director of the Public Health Emergency Preparedness and Response Section, deputy health officer, and director of the Bioterrorism and Infectious Disease Emergencies Unit in the Communicable Disease Control and Prevention Section. She is also a clinical professor in the Department of Pediatrics, Division of Pediatric Infectious Diseases at the University of California, San Francisco.

In 2012, Dr. Pan was chosen to be one of 30 California Health Care Foundation (CHCF) Leadership Fellows, and she completed her fellowship in 2014. Her previous training includes completion of a pediatric residency, chief residency, and Pediatric Infectious Disease, and Traineeship in AIDS Prevention Studies Fellowships at the University of California, San Francisco. She completed a Medical Epidemiologist Trainee year at the SFDPH. She is board certified in both pediatric infectious diseases and pediatrics. She received her M.D. and M.P.H. degrees from Tufts University School of Medicine, and completed her undergraduate education at Stanford University.

Dr. Robert Rodriguez grew up in the border city of Brownsville, Texas. After the University of Notre Dame and Harvard Medical School, he completed a combined emergency medicine/internal medicine residency at UCLA and a critical care medicine fellowship at Stanford. He is a former Department of Emergency Medicine Diversity Director and recipient of the 2013 UCSF Martin Luther King Jr. Award. He currently serves as a professor of emergency medicine and the associate chair of research in the Department of Emergency Medicine at the UCSF School of Medicine. With grant funding from the Centers for Disease Control and National Institutes of Health, Dr. Rodriguez has led research teams examining the effects of the pandemic on the mental health of frontline providers, COVID-19 vaccine hesitancy, and the disproportionate effects of the pandemic on vulnerable populations. Beyond his work at two safety-net hospitals in California, he returned to his hometown to help in the ICU with a catastrophic surge of COVID-19 cases in July 2020. He has served on the Biden/Harris COVID-19 Advisory Board and as an advisor to the Congressional Hispanic Caucus. He was named the American College of Emergency Physicians Humanitarian of the Year for California.

Craig Rouskey has a long history of fighting challenging diseases. Prior to forming renegade.bio, Craig was a co-founder and CSO at Pando Nutrition, an animal nutrition company focused on developing responsible and sustainable probiotic feed for animal health and disease resistance. At Avant Immunotherapeutics, Craig worked on vaccine projects against avian influenza (H5N1) and anthrax. He co-founded the Gonorrhea Eradication Team (GET) and served as principal scientist for the Immunity Project, creating an open source vaccine against HIV. Craig has also served as a scientist in the Antibody Therapy Group at Novartis and in product development with the Next Generation Sequencing group at Thermofisher. Craig holds a Master of Science degree in molecular biology, microbiology, biochemistry, and immunology and has worked extensively in the field of molecular biology and immunology for more than 15 years. Craig is a two-time IndieBio alumnus. He deeply believes that in order to prevent the community spread of SARS-CoV-2, we must test all people.

Tyler TerMeer, Ph.D., joined San Francisco AIDS Foundation as CEO in February 2022. Dr. TerMeer is responsible for setting the organization’s strategic priorities with the Board of Directors and ensuring programmatic and operational excellence, strong fiscal management, effective human resources, and long-term financial viability of our work. He came to SFAF with nearly 18 years of experience in HIV and AIDS policy, advocacy, and nonprofit management. Previously, he served as CEO of Cascade AIDS Project, the largest community-based provider of HIV services in Oregon and southwest Washington. Earlier, Dr. TerMeer served as the director of public policy and government relations at AIDS Resource Center Ohio, as director of Ohio AIDS Coalition, and on a variety of HIV and AIDS policy organization councils and boards including Positive Pedalers (PosPeds), the National Association of People with AIDS, and the National Center for Innovation in HIV Care. He is currently the co-chair of the AIDS United Public Policy Council. For more than a decade, Dr. TerMeer has supported San Francisco AIDS Foundation as a donor through his participation in AIDS/LifeCycle as both a Rider and a Roadie.

Thanks to Renegade.Bio for additional support for this program. 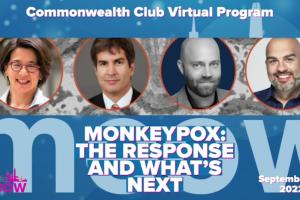 Monkeypox: The Response and What's Next