As the San Francisco Giants gear up after the All-Star break, what can we expect from this team in 2022? It is the 140th season for the franchise in Major League Baseball, its 65th year in San Francisco, and its 23rd at Oracle Park. This is also the third season under manager Gabe Kapler, and perhaps more important, the first season since 2008 without longtime catcher Buster Posey, who retired in November.

With three World Series titles in the last 12 years, and last year’s all- time franchise record of 107 winning games and the National League West title, can the Giants make another run for the pennant this year? Who better to ask than Larry Baer, president and CEO of the SF Giants franchise?

A fourth-generation San Franciscan, Larry Baer has gained a national reputation as one of professional sports’ leading visionaries. Baer joined the team in 1992 as the executive vice president after he and Peter Magowan led the effort to assemble a new ownership group that kept the Giants in San Francisco. A limited partner and board member of the ownership group, Baer was named CEO on January 1, 2012. In his first year as president and CEO, the Giants won their second World Series Championship in three years. In 2014, the Giants won their third World Series title in five years. Baer is responsible for the overall day-to-day operations of the organization and serves as a key strategist and negotiator of the club’s major transactions.

Join us at The Commonwealth Club to hear firsthand from Larry Baer on how the Giants are doing this season and what we can hope to see from the team in the second half of the season. 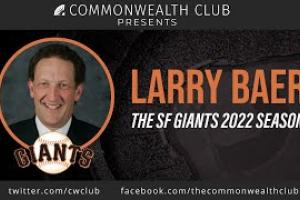