The Republican Party used to stand for individualism, and according to journalist and author Mark Leibovich, it now largely answers to the whims of one man: former president Donald Trump. Tracing Trump’s ascent to the top of a party that in the early months of his candidacy viewed him with contempt, Leibovich brings answers to the massive question of “what happened?”

Mark Leibovich is an award-winning journalist and writer for The Atlantic. Called the “reigning master of the political profile” by Washingtonian magazine and named one of “Washington's 25 Most Powerful, Least Famous People” by The New Republic, Leibovich has decades of journalistic experience, including previously writing for The New York Times for 15 years.

In his latest book Thank You For Your Servitude, Leibovich retells how figures like Marco Rubio, Ted Cruz and Lindsey Graham went from vocal Trump critics to loyal soldiers. With shocking honesty from some of Trump’s biggest supporters admitting they are “in on the joke,” Leibovich uses interviews, news media and an incisive, brutally honest investigation to tell how Trump remade the GOP in his own image—and how far his politicians are willing to go to stay relevant.

Join us, as Leibovich recounts the transformation of the American political right, and how it gave hints of the events we see unfold today. 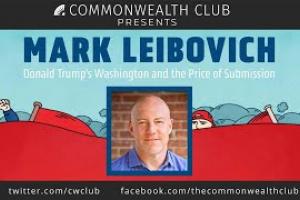