The Future of Abortion Rights in California: A Gathering of Voices

On June 24, the U.S. Supreme Court issued a decision on abortion rights (in Dobbs v. Mississippi) that overturned Roe v. Wade, the landmark case that has provided federal protections and defined a woman’s right to abortion since 1973. After decades of whittling away at Roe's protections, a majority of the court's justices have upended it, letting individual states decide their own approaches to reproductive rights. With this decision, some 22 states are expected to quickly make abortion all but illegal, while California will likely remain one of the few where full abortion rights are guaranteed. Women in other states across the country might lose access to reproductive care overnight or find services even more severely restricted. In California, women’s health-care providers and women’s rights organizations are gearing up for a massive influx of people seeking care and assistance, while some are already exploring how the state can become a sanctuary for women in search of reproductive health care. California's approach to protecting abortion rights will be one of the most watched in the country.

To mark this critical moment in the history of women’s rights and to explore the role that California could play in a post-Roe environment, The Commonwealth Club of California is joining with Women's March San Francisco for a special gathering including conversation, networking and learning. With thanks to HBO/Warner Media, the gathering will also include a free community screening of the new HBO documentary The Janes, an in-depth exploration a clandestine abortion group that operated in Chicago before abortion rights were guaranteed by the Roe v. Wade decision (and, later, Planned Parenthood v. Casey). The documentary premiered at the Sundance Film Festival in January and HBO earlier in June.

The gathering, produced in partnership with Women’s March San Francisco and with support from The California Wellness Foundation, includes:

Abortion rights leaders and legislators from across California will discuss what this moment means for the Golden State, how abortion rights might be further enshrined within the state, and what can be done to ensure that financial barriers are eliminated so that all women in California can have access to reproductive rights. Speakers include: Gilda Gonzales, president and CEO of Planned Parenthood Northern California, California State Assemblymember (District 15) Buffy Wicks, and Sylvia Ghazarian, executive director of the Women's Reproductive Rights Assistance Project.

After the program, everyone is invited to a special outdoor reception on the rooftop deck of The Commonwealth Club. Attendees will get to network and mingle, and enjoy light bites and wines from the Bay Area.

With special thanks to HBO and Warner Media, The Commonwealth Club will offer a free screening of The Janes, a new documentary about an underground network for women with unwanted pregnancies that provided low-cost and free illegal abortions in the pre-Roe v. Wade era. The documentary premiered on HBO earlier in June.

One ticket (in-person, option 1) provides access to all three components of the gathering. Please arrive by 3:45 p.m. for those attending in-person.

There is also a free ticket option for those interested in attending the documentary film screening.  Please arrive by 6 p.m. to view the film only.

Free online access to the program discussion from 4–5 pm is also available for those unable to attend in person.

No large bags or backpacks please. All bags may be subject to search.

This program is funded by a grant from The California Wellness Foundation (Cal Wellness). The Foundation's mission is to improve the health of Californians. Cal Wellness is dedicated to promoting equity through advocacy and access. 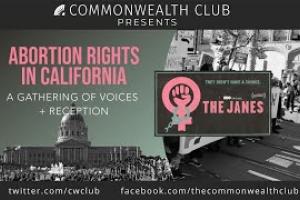 The Future of Abortion Rights in California: A Gathering of Voices