In February 2022, Chantale Wong was confirmed by the U.S. Senate in an overwhelming and bipartisan vote to serve as U.S. director of the Asian Development Bank, making her the first openly lesbian Senate-confirmed ambassador in U.S. history.

The Asian Development Bank was founded in the mid-1960s as a financial institution focused on fostering economic growth and cooperation in one of the poorest regions of the world. Based in Manila, The Philippines, ADB commits tens of billions of dollars to projects throughout the region.

Join us for an online discussion with Ambassador Wong, who will be joining us from Manila to discuss the role of ADB as well as the impact of U.S. economic policies on gender equity, LGBTQIA rights and the environment.

Chantale Wong has had a long and distinguished career in public service, a leader-participant in some of the most significant events in U.S. history. Until August 2016, she was the senior vice president at a technology startup firm, Amida Technology Solutions, where she focused on solving data interoperability challenges by developing agile, open source tools. She was appointed by President Obama to serve as Vice President for Administration and Finance and the CFO at the Millennium Challenge Corporation (MCC).

Prior to MCC, she was the budget director of the National Aeronautics and Space Administration (NASA), where she realigned the budget function to the requirements of NASA’s post-space shuttle missions. During her career, Wong has held leadership positions at the Office of Management and Budget, Departments of Treasury and Interior, and the Environmental Protection Agency, in addition to NASA. Her work experience includes local government and the private sector.

Wong joined the staff of the Asian Development Bank (ADB) in Manila in 1999 as an environment specialist to ensure the bank’s assessments complied with their environmental and social policies. She led development and publication of ADB’s first Asian Environment Outlook (2001), and was subsequently appointed by President Bill Clinton to its Board of Directors, representing the U.S. as the alternate executive director to oversee operations. She was also a member of the ADB’s audit committee and the development effectiveness committee, tracking the effectiveness of the Bank’s projects through performance and impact evaluations.

She was the founding chair of the Conference on Asian Pacific American Leadership (CAPAL), an organization dedicated to encouraging careers in public service by providing training, workshops, mentors, and work opportunities for young Asian Americans and Pacific Islanders (AAPIs). She is also a member of the Advisory Board of Veterans for Global Leadership, which provides leadership opportunities for veterans transitioning into careers of diplomacy, security and development. In addition, she is a founding member and treasurer of the board of Focus on the Story, a nonprofit organization whose mission is to support visual storytellers of diverse backgrounds in bringing attention to critical issues, bridging cultural gaps, and sparking social change.

Aside from public and community service, visual storytelling is Chantale’s passion, one that she has nurtured the last 5 years, traveling off the beaten paths on several continents to capture visual messages of peoples less seen. Her portraits capture the souls of the subjects, whether chronicling urban blight in East Baltimore or photographing crew teams on the Anacostia at dawn. Her travels to Cuba, India and Nepal, Southeast Asia and an epic trip on the Trans Siberia Railway have produced stunning images of cultures remote and afar. She has also produced landscape images that capture the essence of time and place. The current focus of her photography journey has brought her to photo journalism, documenting events of our communities. She has chronicled the annual Congressional Civil Rights pilgrimages to Selma, Montgomery and Birmingham, Alabama with Civil Rights icon the late Rep. John Lewis—earning her the role of the official photographer for other civil rights pilgrimages of the Faith and Politics Institute.

This program is presented in partnership with the APA Heritage Foundation.

Thanks to The Mason in Pattaya for their support for the production of this program. 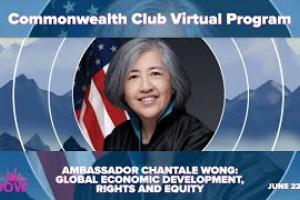