A career in television journalism can be fraught with burnout, impostor syndrome and publicly aired stumbles. Especially in one of the craziest news eras America has ever seen, it is almost impossible to remain calm among the fury of stories to follow and the demanding and roles and responsibilities of the news industry.

MSNBC anchor and New York Times bestselling author Katy Tur knows precisely what difficulties come from a life chasing news stories. Though she gained popularity covering then-candidate Donald Trump in 2015 and 2016, her newest release Rough Draft details the early years of her life as the daughter of two groundbreaking helicopter journalists in Los Angeles leading up to her own breakout career as a reporter. She explores the gift and curse of family legacy and for the first time, opens up about her complicated relationship with her parents. She also takes readers behind the desk to reveal what it is like to report during a time of massive chaos, disinformation and extremism, and she shares how she navigated the unprecedented and embraced the moment.

Join INFORUM live in San Francisco for an intimate conversation with MSNBC's Katy Tur as she brings us inside her riveting life in TV news.

In Conversation with Marisa Lagos

Online:
Free for members
$10 nonmember
$28 member or nonmember with book 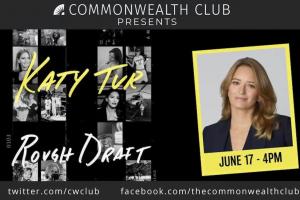