The Ronald Reagan Institute Shultz Lecture Series was originally conceived to honor Secretary Shultz on the anniversary of his 100th birthday; to celebrate and introduce more people to his incredible achievements and leadership in service to the United States and the world. This inaugural Shultz Lecture brings together three leading scholars to discuss the legacy of Secretary George P. Shultz: the man, the statesman, and a cherished friend and mentor to many.

The George P. Shultz Lecture Series is a collaboration spearheaded by Taube Philanthropies in partnership with the Ronald Reagan Presidential Foundation & Institute. Two lectures will be held in 2022, with the West Coast lecture taking place at The Commonwealth Club in San Francisco in June, and the East Coast lecture being held at the Ronald Reagan Institute in Washington, D.C. , later this year.

Presented by The Commonwealth Club in partnership with the Ronald Reagan Institute and Pepperdine University.

Media sponsors for this featured program:

66th U.S. Secretary of State; The Tad and Dianne Taube Director of the Hoover Institution (Participating via video) 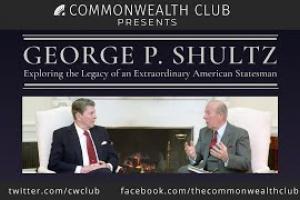