"Pod Save America" co-host Dan Pfeiffer argues that democracy relies on a shared understanding of reality—and with misinformation and fake news saturating the American political right, this shared understanding is in peril. Hobbling America’s ability to rationally deal with threats like the COVID pandemic and climate change, Pfeiffer argues that something must be done about right wing media—and fast.

Dan Pfeiffer is an author, political commentator and former senior advisor to President Obama. An outspoken critic of the American political right and a longtime Obama aide, Pfeiffer is a regular contributor to CNN and co-hosts "Pod Save America" with Jon Favreau, Jon Lovett and Tommy Vietor.

In his latest book, Battling the Big Lie, Pfeiffer unpacks the history of how disinformation became the bread and butter of right-wing political media, and how lies like QAnon and the “stolen election” thrived off of polarization and became supported by millions of Americans and even members of Congress. Laying down guides to spot fake news, fact check dubious stories and address the conspiracy theory believers in one’s own life, Pfeiffer offers essential help in navigating what he says is a political movement waging war on the very idea of objective truth.

Join us in San Francisco as Pfeiffer navigates a labyrinth of deception and political desperation, and lays out steps for how we can all battle the rise of misinformation in America.

Co-host, "Pod Save America"; Author, Battling the Big Lie: How Fox, Facebook, and the MAGA Media Are Destroying America 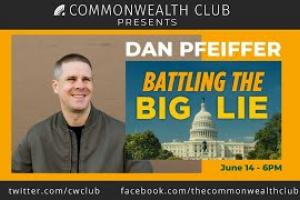