Kwame Onwuachi holds countless, monumental accolades. From being the James Beard Foundation Rising Star Chef of the year to being dubbed “the most important chef in America” by the San Francisco Chronicle, Onwuachi is an expert restaurateur and chef. Moreover he joyously seeks to flaunt the diversity of American food by bringing to life the dishes of his own America. In his forthcoming book My America: Recipes from a Young Black Chef, Kwame brings the nation and world together, both in his stories and on the plate.

More than 125 recipes accompany Onwuachi’s personal tales and connections to the dishes, creating an intimate cookbook that celebrates the people and flavors of the African Diaspora. The globe-spanning recipes include sumptuous fares such as Trinidadian callaloo and shrimp étouffé. Considering My America opens with a “Spice Blends” section, we readily forecast many flavorsome, powerhouse meals to come.

At Inforum, Kwame Onwuachi will elucidate and familiarize us with the flavors that comprise his America. Alongside these, we’ll get first-hand accounts of the stories that brought these dishes to his table. You will leave hungry for more and know just where to find it.

This program is part of The Commonwealth Club's Food Lit series, underwritten by the Bernard Osher Foundation.

Chef; Author, My America: Recipes from a Young Black Chef 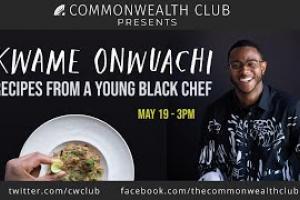