As San Francisco decides whether or not to recall District Attorney Chesa Boudin on June 7, join us for a nonpartisan forum to hear from both sides on this important choice. Boudin was elected in 2019 on a progressive platform of decarceration and criminal justice reform. While many applaud these efforts, doubts about the effectiveness of Boudin’s policies, coupled with highly-publicized crimes, have dogged Boudin’s office (and city leadership at-large). Increasing fears of disorder in the city and questions about the district attorney’s job performance have led to San Francisco’s second recall election this year.

To break down the Boudin recall, The Commonwealth Club has invited two leading voices with opposing views on this important election.

Lara Bazelon is a professor of law and the director of the Criminal Juvenile Justice and Racial Justice Clinical Programs at the University of San Francisco School of Law. Her writings on the justice system and its shortcomings have appeared in The Atlantic and The New York Times, and she’s been a vocal supporter of the district attorney.

Brooke Jenkins served as assistant district attorney under Boudin until October 2021. She agrees with Boudin’s central tenet that the criminal justice system is racist and needs reform, but she left the office due to what she saw as a prioritization of politics over outcomes and the needs of crime victims and their families. She supports his recall.

Don’t miss your chance to ask a question of our panelists, even if you can't join us that night. Submit your questions prior to the program by filling out this form. We'll also be accepting audience questions as attendees arrive on May 17.

Get registered to vote before the May 23 deadline here. 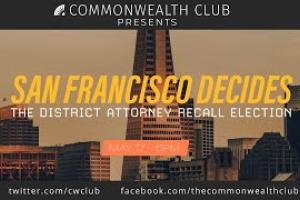