Jonathan Martin and Alexander Burns: Trump, Biden, and the Battle for America's Future

Can democracy, as we know it, ever work again? This is the question that New York Times political journalists Jonathan Martin and Alexander Burns asks after examining the 2020 election and the first year of Joe Biden’s presidency, and going behind the scenes of this 18-month crisis in American democracy.

In their latest book, This Will Not Pass: Trump, Biden, and the Battle for America's Future, Martin and Burns give the account of the events that led to and from the 2020 presidential election in stunning detail. Walking through the coronavirus pandemic, the January 6, 2021 attack on the Capitol and the political brinkmanship of Biden’s first year in office, Martin and Burns provide in-the-room descriptions of Trump’s assault on the election, the behind the scenes story of how Kamala Harris became Biden’s vice presidential pick, and how the two-party electoral system was strained to its limit.

Join us, as Martin and Burns provide never-before-seen descriptions of the events behind one of American democracy’s most infamous hours.

In Conversation with Willie Brown 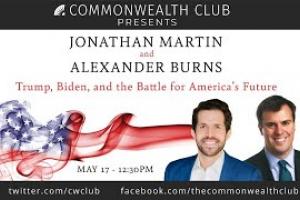