Journalist Anya Zoledziowski joins us for an inside look at the struggle of LGBTQ people in Ukraine as that country struggles with the Russian invasion. She has reported on a group of Gen Z students who are working around the clock to smuggle HIV and gender-affirming medications to people who desperately need it and are stuck in Ukraine. Russian forces have targeted civilian health care infrastructure as part of their invasion, but so far these students have managed to coordinate five deliveries into Ukraine with dozens of boxes of HIV medication and hormones for trans people.

Don't miss this online talk about helping the struggling population of Ukraine.

Anya Zoledziowski is an award-winning staff reporter at Vice World News. Her reporting focuses on a wide range of social justice issues, including Indigenous affairs, race, politics, sex worker rights, and the disproportionate harm experienced by racialized communities in the climate crisis. She graduated from the University of British Columbia Master of Journalism program in 2018, and has since won multiple awards for her investigative reporting delving into hate crimes targeting Indigenous women at the hands of transient workers who move into “man camps,” temporary housing units near resource extraction sites. She also won the CAJ Reconciliation Award in 2021 for her Indigenous affairs reporting. Prior to working at Vice, she was with CBC, the now-defunct StarMetro Calgary, and many freelance assignments. 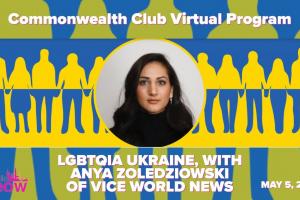