Charles Booker: The Young Democrats and the Fight for America's Future

Going from a childhood in the impoverished Louisville West End to being the youngest black lawmaker in Kentucky, success stories like State Rep. Charles Booker’s continue to cross political divides to inspire a nation. Facing poverty, systemic injustice and a strongly Republican political establishment, many lessons can be learned from Booker’s determination and strength to rise to the Kentucky legislature.

Charles Booker represented part of Louisville in Kentucky’s House of Representatives from 2019 to 2021, winning the Democratic primary against six other candidates. Having grown up facing poverty, hunger and the loss of family members from gun violence, Booker’s journey to public office saw him complete law school despite financial struggles, receiving an unlikely appointment to the Fish and Wildlife Commission, and then win a competitive election for a seat in the Kentucky House of Representatives and go on to run to represent Kentucky in the United States Senate.

In his new book, From the Hood to the Holler: A Story of Separate Worlds, Shared Dreams, and the Fight for America's Future, Booker unpacks his unlikely journey to give commentary on social and economic systemic injustice and a vision of how to provide racial equity to America’s least fortunate members. He contends that as tensions and divisions grow, these interventions are not only effective, but urgently needed.

Join us as Booker tells a tale of grit, determination and hope in the darkest of circumstances, and sheds light on how we can make a brighter future for all.

Former Member, Kentucky House of Representatives; Candidate for U.S. Senate, Kentucky; Author, From the Hood to the Holler: A Story of Separate Worlds, Shared Dreams, and the Fight for America's Future; Twitter @Booker4KY

In Conversation with Vikrum Aiyer 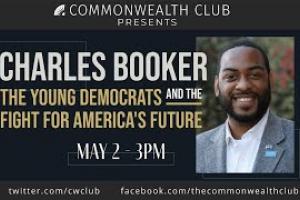 Charles Booker: The Young Democrats and the Fight for America's Future